A spring day interrupted by a wind driven fire in Rancho Cucamonga.

Once again Los Angeles finds itself ground zero over race issues with the owner of the LA Clippers lighting the spark.
It's been 22 years to the day since the City of Los Angeles exploded in to a riot over race.
Tonight at the Staples Center, not far from LAPD Parker Center where the rioting began in downtown back on April 29, 1992,  the Clippers will play against the Warriors.

I heard Phillip King before I actually saw him.
He was beat boxing and playing the harp simultaneously on a sidewalk.
Definitely a rare human being in the City of Angels.

A funeral procession for fallen LAPD motorcycle officer Chris Cortijo.
Officer Cortijo, a 26 year veteran of LAPD, worked out of Valley Traffic and was a DUI specialist with over 3000 DUI arrest credited to him. He was also named Officer of the Year twice.
Officer Cortijo was killed while waiting for a traffic light by a vehicle driven by an alleged intoxicated driver, at Lankershim and Saticoy on April 5, 2014.
Hundreds of police motorcycles, from agencies all over the state, led the procession through downtown LA and up the Hollywood freeway to Forest Lawn.

Visited Murphy Ranch in the hills directly above Los Angeles today.
The ranch was originally built to be the home and new US capitol of nazi power for Adolph Hitler, if WW2 was won by nazi Germany.
US nazi sympathizers living in Hollywood built the ranch which had 22 bedrooms, a vegetable garden, diesel power plant, a giant water tank, and bomb shelter.
The ranch was raided by US federal authorities shortly after Pearl Harbor was bombed, the 50 residents were arrested.
Murphy Ranch was briefly turned in to a artist colony and once home to novelist Henry Miller.
Most of the abandoned ranch is rusting away and falling apart. The buildings are covered with graffiti and the grounds are littered with trash. The State Parks system has plans to bulldoze the remaining structures and make the area in to a picnic space.
April 20, 2014 also marks the 125 birthdate of Adolph Hitler.

Have this week's cover image of the LA Weekly.
The story, "Gimme Shelter," is written by the amazing Gendy Alimurung. 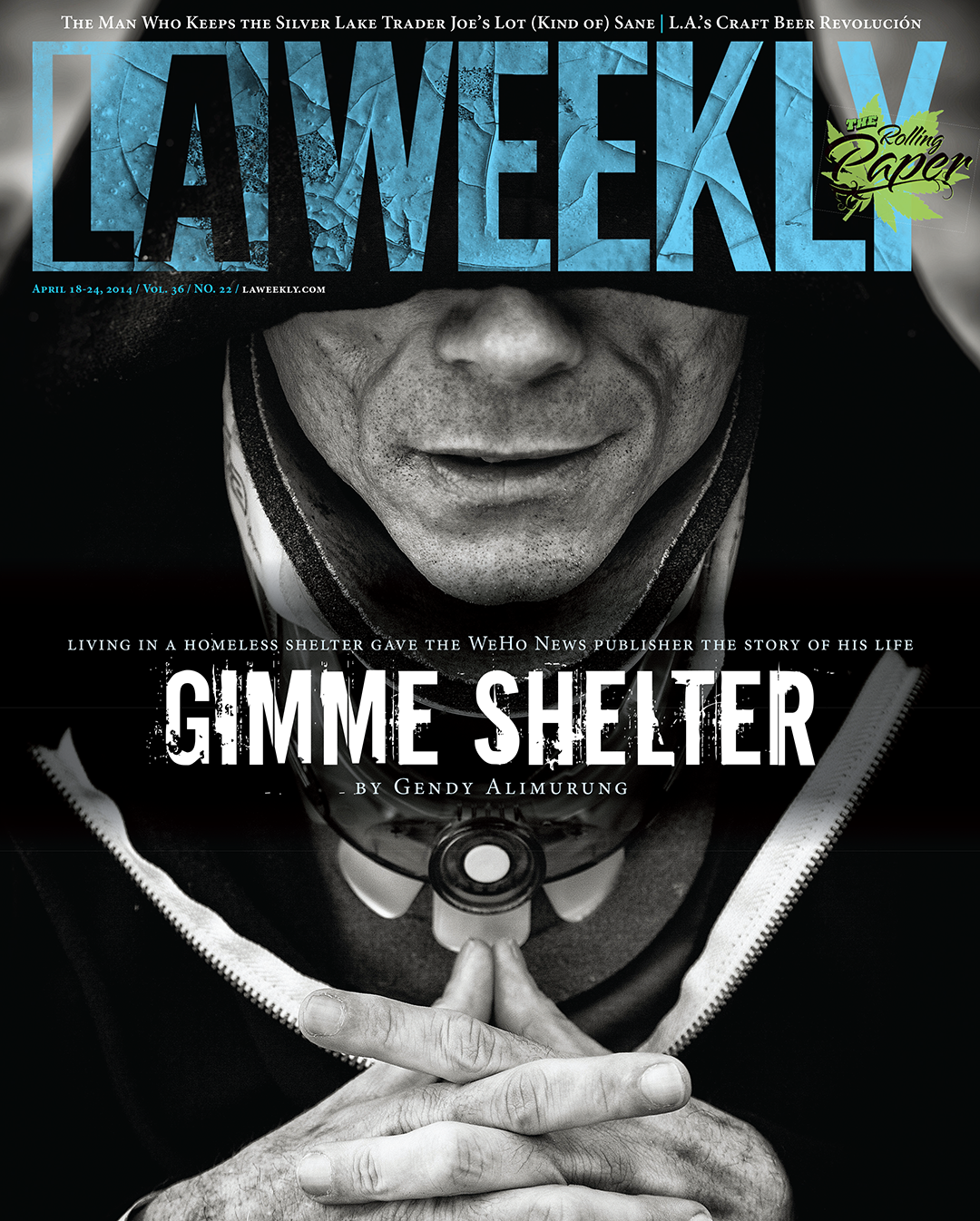 The hands and Guild guitar of musician Peter Demian on the Venice Beach boardwalk. You can see Peter play daily in front of the Sidewalk cafe on the boardwalk.

Email ThisBlogThis!Share to TwitterShare to FacebookShare to Pinterest
Labels: Venice

The first of four "Blood Moons" that will be spread out over 6 month intervals, appeared over Los Angeles this evening.

Photographed this guy at the Venice Beach drum circle last Sunday. He was definitely marching to the beat of his own drummer.

Email ThisBlogThis!Share to TwitterShare to FacebookShare to Pinterest
Labels: Venice

A Los Angeles Police Department officer was shot in the lobby of the West Traffic Division, which shares a building at the LAPD's Wilshire Station, and the suspect was also wounded.
The desk officer who was shot seven times and is expected to make a full recovery. The suspect was shot four times and is in critical condition at a local area hospital undergoing surgery.
The shooting was the second at the station in 11 months.
Two detectives were shot and slightly wounded in a ambush outside the station on June 25.

Went out for a quick spin on my bicycle before the official opening of CicLAvia on Wilshire Blvd. Didn't see one soul for miles in the early morning hours, felt just like "The Omega Man."
It was actually really awesome to have the Blvd. all to myself for a bit.
Later in the day it was a bicycle traffic jamzilla from Fairfax to Grand.

A wonderful blue and cloudy day in Los Angeles.