Met a homeless man named John sitting out front of a Smart and Final grocery store in Venice, he was begging for food. We spoke for a while. Found out he just got out of the hospital after trying to kill himself by slitting his wrist last week on the Santa Monica Pier. The hospital kicked him out after two days without any medication or further treatment. He puts on Neosporen twice a day to help heal his massive wound. 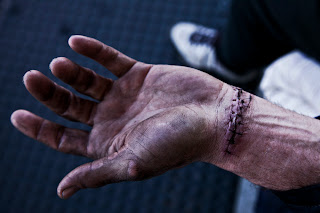