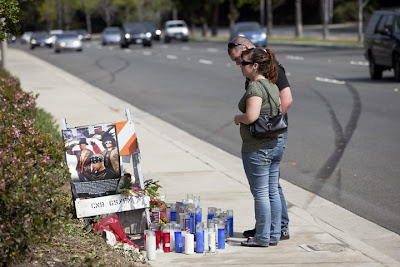 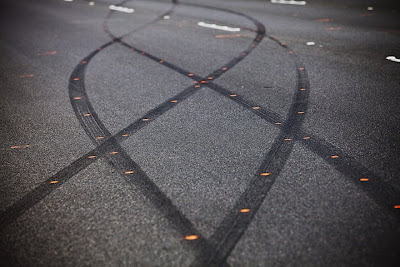 Street memorial and skid marks on Jamboree Road in Irvine where Charles Lewis was killed in a traffic collision. Lewis was the founder of TapouT clothing line, a tee-shirt business he turned into a multi-million dollar business which was an off shoot of his love for mixed martial art fighting. He began selling the now popular tee-shirts from the trunk of his car.

Lewis' fiance, a passenger in Lewis' car, was also involved in the wreck and remains in a local hospital, she is expected to live.
Police reports state that Lewis, driving a red 2004 Ferrari Medona, was either involved in a street race with a white Porsche coup, owned by Jeffery David Kirby, or hit by the Porsche in a road rage or DUI accident. Kirby has been convicted of a previous DUI and other driving infractions.
Lewis' fans have come from all over to pay their respects, leave flowers, photographs, and other keepsakes to remember him.
Lewis is from Costa Mesa, CA.
Photos by Ted Soqui c 2009