Another Senseless Shooting In The HLP 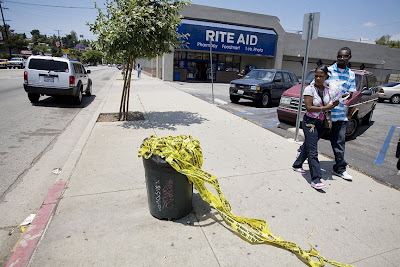 A 14 year old girl sitting in her families car was struck in the head by a stray bullet when two gang members got into an argument near a Rite Aid parking lot at York Blvd. at Ave 64 in Highland Park. One gangster produced a gun and shot the other twice in the arms, one bullet strayed and hit the girl. She was pronounced brain dead and will probably not make it according to LAPD authorities (she has now died). Several people in the area were arrested. The area where the shooting occurred has a red hot gang problem. Gang graffiti goes up faster than it is taken down and LAPD are overwhelmed by the gang plague. The local city councilman, Jose Huizar 14 District, is oblivious to the gang plague and has done nothing effective to slow the tide. Sadly there is another big box-pharma store opening on the corner of York Blvd. at Eagle Rock Blvd. There are now four within 6 miles of each other, the third is at Figueroa St. at Colorado Blvd, and the fourth is at Colorado Blvd at Eagle Rock Blvd. I went into the Rite Aid at York Blvd. and Ave 64. The biggest selling item was 12 packs of cheap beer. Theses big-box-pharmas are just gloried liquor stores. The city councilman should produce legislation, too late now, that would limit the amount of these big-box-pharmas and not allow them to flood the Highland Park area with cheap hooch. They homogenize a wonderful historic neighborhood .
at 3:22 PM