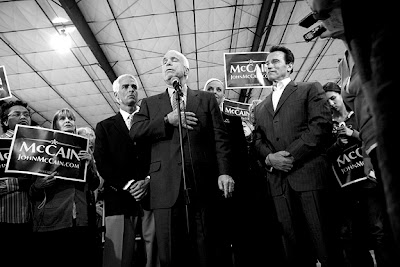 Senator John McCain and his wife Cindy made his last campaign stop in San Diego at the airport. He was met by California Governor Arnold Schwarzenegger who endorsed Mr. McCain earlier this week after stating he would not endorse anyone for President. Mr. McCain spoke to the crowd of about 300 supporters and then presented his 91 year old mom, Roberta Wright McCain (oil heiress). Interesting McCain factoid. He was born in Panama at Coco Solo a Panama Canal Zone. Maybe that will explain his stance on immigration?
Photo by Ted Soqui c 2008
at 7:39 PM